Since this fixture was announced this squad have been putting in a massive effort in training and it truly payed off. We came into this game missing a couple of key players but it showed the strength this squad has with a few changes at the back the defence was strong and kept Ferrybank to very few chances in the first half.

A great save from Jake Moore seen the ball rebound out to a Ferrybank player and seen us go behind. But not the first time this season we went into the break 1-0 down but the pure determination and desire of this team seen us come running out of the blocks in the second half and we’re well on top with a goal on the horizon. Emily Blackmore came on at half time and put the Ferrybank defence under great pressure with her pace down the wing and it eventually payed off as the ball was deflected into the air and seen Aidan Carroll get his head to the ball and knock it into an empty net to make it 1-1.

We kept pressing Ferrybank while playing some lovely football the second was always on the way. The pure determination and excellent work rate from Aidan who covered every corner of the pitch seen him grab a second to put us in the lead. With Michael Cronin, Patrick Dermody and David O’Shea holding strong at the back there was still very few chances for the home side and we eventually found ourselves in the promising position of being 3-1 up. The ever present and captain for the day Eoin O’Callaghan added to his goal tally for the season and seen him make it 3 goals in 3 games in what was a superb performance from him on the wing.

Ferrybank made it 3-2 late on and put us under a lot of pressure but a few changes to our formation to strengthen up the back seen us hold out and take all 3 points. Great credit to all kids involved yesterday what a superb bunch of kids coach. Team ; Moore, Cronin, O’Shea, Dermody, O’Callaghan (C), Carroll, Croke, Dunphy, Wall. (Subs) Cuddihy, Blackmore, O’Keefe, Byrne, Herron. Scorer : Carroll (2), O’Callaghan.

A cracking game between 2 evenly matched teams. Eoin O’Callaghan continued his good form with another cracking strike to give Mooncoin the lead midway through the first half and they held firm with the defence led by David O’Shea and Ciara O’Keeffe leading by example. Jake Moore was a busy man in the second half with one world class save keeping Southend out but unfortunately the rebound was scrambled home. Eoin O’Callaghan went close with a couple of free kicks and Anthony Dunphy put in a superb shift up front with a non stop work rate.

A draw being a fair result but the improvement shown by this squad is testament to the hard work put in over the last couple of months by Derek Tebay and the kids themselves with slick passing and a never say die attitude standing to them in every game.

This squad face an away trip to Ferrybank in their next game in 2 weeks. Well done all. 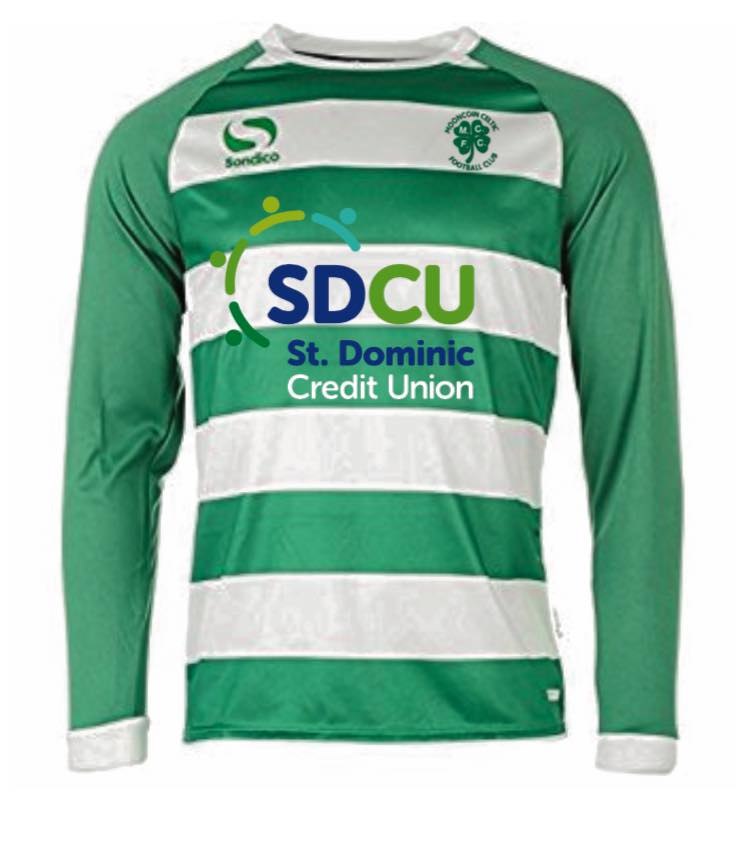 Big thanks to St.Dominic’ Credit Union for kindly sponsoring a new set of jerseys for our U-12 team for the 2017/18 season.