A convincing win for the lads with Lee Kelly notching his first ever brace at the grand old age of 43 years and substitute Mick Dwyer getting the goal of the game to stake a claim for a starting spot on Wednesday evening.

First one down, defeat Red Star Wednesday evening and they face Kilmacow in a play off providing Kilmacow also win their last game.

Well done and best of luck on Wednesday.

Fixtures for the week, this evening: 4th division home to Crusaders, kick off 6.30.

The first of 2 games in 3 days for the older squad. Big squad will be utilised for both games as they look to win the plate section.

Tomorrow: 2nd division cup away to Villa, kick off 7pm.

The lads face 2a side Villa in the quarter final as they aim for the double. Few sore bodies after the bruising first round win against Tramore should be fit for this one.

The lads will be hoping to win this one to clinch a play off at the very least in the plate section. All depends on other results.

Thursday, u11 home to Ballyduff, kick off 6.45. This young squad have only a couple of games remaining and will hope to continue their sparkling form.

U13 away to St Paul’s, kick off 6.30 Victors lads will look to build on their fantastic win in St Saviour’s last week when they’ll travel to take on the Parish.

Support is most welcome as always.

The dust has barely settled from last nights big show and we swiftly move on to the next step on our fundraising drive. Twice last year weather caused our golf classic to be postponed, so we are hoping and praying that the man above is good to us. Waterford golf club play hosts next Saturday for the classic which is a 3 man/woman team event. €90 per team including dinner afterwards which is outstanding value , also there are lots of prizes to be won including a 4ball in the k-club, on what is going to be a great day. To book a tee time contact one of the following with times available from 10am until 5pm:

Just a little post on last nights 20K drop show. A brilliant night was had by all with every contestant walking away with some winnings,young Cormac Fenton from our U11 squad with the help of his coach Kevin Kennedy was the biggest winner scooping €700.

A big shout out to all who helped set up and run the show, to Pallas marketing for the wonderful show they put on.

Big thanks to all the major advertisers , all sponsors to the bidders and buyers in our auction. Finally, to all the people of Mooncoin and surrounding areas, we are extremely grateful for your support as we strive to develop our new ground.

A MASSIVE THANK YOU TO YOU ALL .

After a disappointing result last week this team were raring to go. A well fought battle in first half seen very little chances created. A 25yard Stradbally strike caught Jake Moore off his goal to put them 1-0 up at half time. But the never die attitude of this group seen us control the majority of the second half and captain of the day Patrick Dermody came close with a header going just over the bar.

u12 debutant Anil had the Stradbally full back run riot with his quick speed and skill only for the ref to keep giving free kick out every time he attacked the corner.

Another debutant Ben O’Hanlon was impressive with his close control and skill on the ball and could be what this team has been missing all season. Ben had 2 efforts come close. Well done to all involved keep battling and that win will come soon.

Man of Match was Liam Joy, who came on at half time and strengthened up the defence making some great last ditch clearances and hard but fair tackles.

Tonight is the night of our big club fundraiser for the new pitch development in suir crescent . If you haven’t got tickets you can get them on the door . A great night is in store please get to the parish hall tonight doors open at 7.30pm . Parking in hall car park , overflow cars to the church car park . See you all soon

League hopefuls Ferrybank came to Ashgrove today with 3 points on their minds & went 2 up after 20 minutes, despite Mooncoin having a hat of chances early on, it looked like one of those days, but credit to the lads they kept believing that more chances would come & they did, Kieran Fagan was a thorn in Ferrybanks side from the start and made no mistake when when his chances came, 2 goals from Kieran put us back in the driving seat, the last 10 minutes was heart stopping at times, as both teams went for it. Brilliant never say die from the lads today and great performance. Man of the match Kieran followed closely by Adrian, Alan, Luke & Robbie

Tomorrow u12 away to Stradbally, kick off 10.30.
Derek’s squad will look to bounce back from last week’s defeat and will look to build momentum coming into the cup.
U14 home to Ferrybank B, kick off 2pm
A big game here with leaders coming to Ashgrove to avenge their defeat from earlier in the season.
Support as always is welcome.

Tickets purchased for the original show still stand or tickets can be purchased on the night. The club hope that we get as many families there on the night for what promises to be a great night with 8 people getting the chance to win €2500 each.

There will be a bar open in the hall on the night aswell. Parking will be available at the hall or at the church car park. Your continued support is very much appreciated. 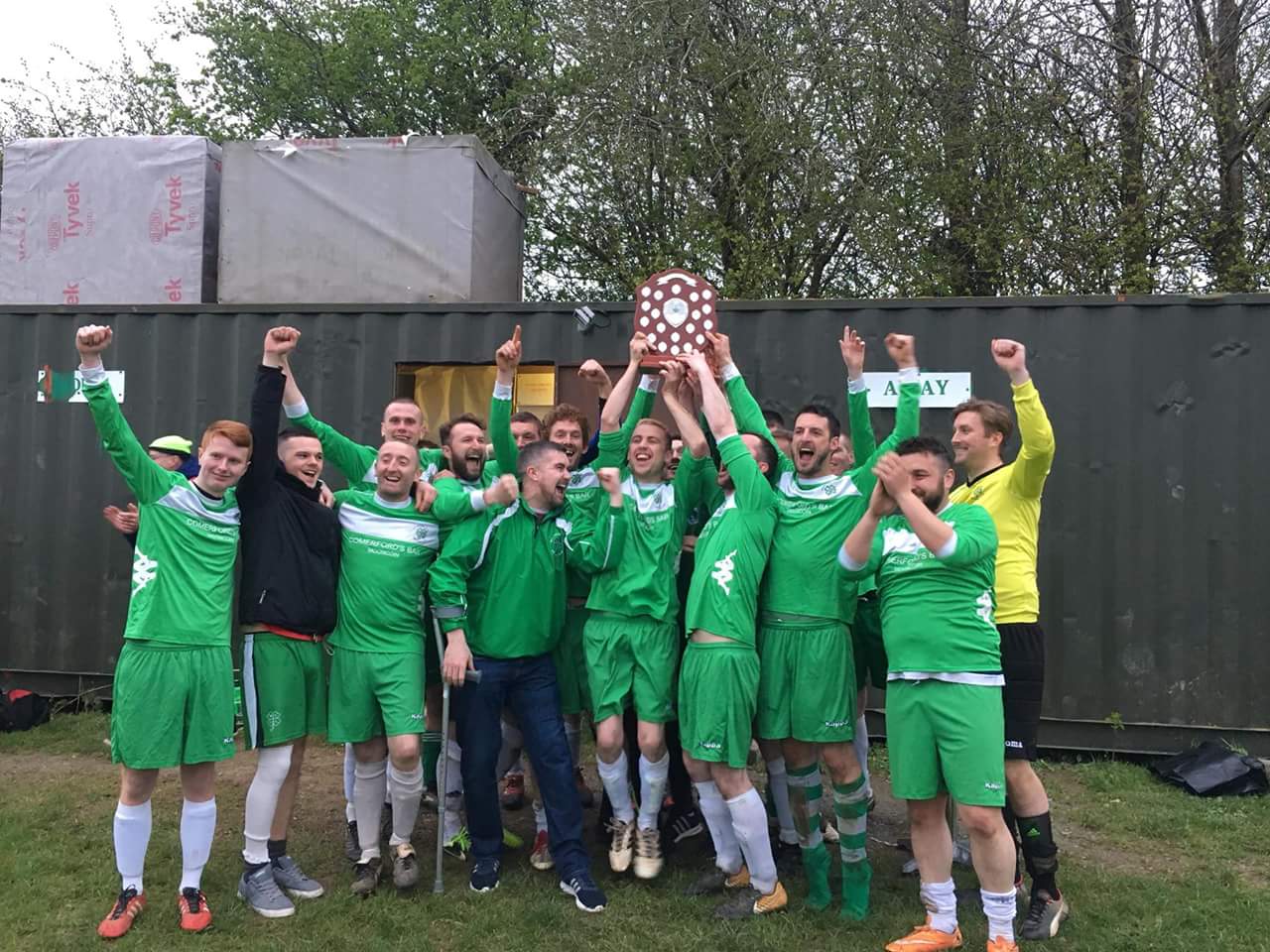 The league winners had their first game in the cup last night against the very good tramore side who finished only 2 points behind them in the league and were the only team to take points off the lads all season , so we knew it was going to be a tough game .

Wayne changed up the formation with a diamond 4 in midfield to crowd the middle , and it worked very well . The first half was very tight and evenly matched with brilliant strength an good hard tackling on display from both sides .

We limited tramore to mabey 1 or 2 long range efforts which never troubled our goal , we had a couple of half chances ourselves but went in at halftime 0-0.

The second half was much the same both teams really giving Everyting they had , our boys worked unbelievable hard all over the field giving tramore no space or time on the ball from front to back .

On 65 minutes our work paid off , Ian synnott crossed from the right side to Johnny Kavanagh who held the ball well and could have had a penalty when he was taken down but he quickly got himself up and buried it into the left hand corner , that’s 8 goals in 4 games for in form Johnny .
Our hard work continued and with tramore not being able to create anything tempers started to flare a little , with both sides having a couple of bookings . We made some changes as the legs got a little weary . Kieran o Brien replaced robbie walsh , pj McGrath for Kevin Dowley , liam walsh for wayne kelly , Jamie Moore for Ian synnott, eoghan walsh for Daniel synnott . The fresh legs helped us keep up the fierce pressure never giving the opposition time on the ball . Liam walsh hit a tramore man with a crunching tackle (but fairly) shortly after coming on and again things got heated between both sets of players but we didn’t let any of the handbags get to us and got straight back into playing good football again ,when we had it we didn’t panic playing nice passing and moving in all parts of the pitch . And in the end ran out 1-0 winners in one of our best performances of the season to date .
Team – ross o keeffe , Ivan Tobin , chris o Hanlon , Wayne kelly , Jason Sauvage , Ethan Ryan , robbie walsh , Daniel synnott , kevin Dowley , Ian synnott , johnny Kavanagh .
Subs used – K.o.brien , Pj McGrath , L.walsh , j.moore, E.walsh.

It’s a credit to all the players after a tough league winning season to put in such a brilliant performance against a very good tramore side . After the game the junior league presented captain Daniel synnott and the squad with the 2b league winning shield and medals in scenes of great joy in ashgrove . Well done to all involved , next up in the cup is villa 2a fixture and time not scheduled as of yet , but if the boys keep turning in performances like this a league and cup double could really be a possibility . Well done boys , HON THE COIN ☘️☘️☘️