A thrilling encounter in Ashgrove today as this very determined bunch took to the pitch after putting in overtime in training for the last two weeks in search of the first win of the season and proved that never giving up and working hard is the key. We started the strongest and looked like we would have an easy day as Lee Freyne took the defence apart on many occasions and opened the scoring with a great goal with the outside of his boot. We had two big casualties today in Ciara O’Keeffe and Alex Bailey.

We had to play Mike O’Keeffe at right back but he took to it like a duck to water as he had a great game. Captain Adam Conway provided protection for him and there will be a few sore ankles in Waterford tonight as he gave a Mick McCarthey style performance that stopped De La Salle right in their tracks. Liam Hogan slotted in at centre back and brought composure and cleared every single ball. Denis Kinsella at left back was outstanding today and just appeared everywhere along the back line and cleared the ball with every part of his body. Sam Hartwell ran all over the pitch and was involved in linking up much of the attacks and both him and Tom Conway linked up on many occasions to assist the rest to great effect with Sam scoring our second goal. Both were excellent today.

We went in 3-0 up at half time. Brian Dunphy made his first start of the season and duly obliged with a sensational game which saw him notch a goal just before half time. De la Salle got one back before Brian Dunphy made a huge run after a great pass from Tom Conway put him in to score a great goal to make it 4-1. De La Salle scored two goals in quick succession but we held out and didnt panic on the ball and didnt leave De la salle through again. Will Cuddihy came on for Sam Hartwell and got stuck in. In the mix with all this today came a man of the match performance from Conor Dermody who tore De La Salle apart every time he got the ball. He made cracking runs up the line and got stuck into every tackle and was involved in absolutely. Jake Moore was fantastic in goal and pulled off some great saves as he does week in week out Super performance from everybody.

Patrick Dermody and Matthew Morahan didnt were our unused subs but plenty of chances for them to come and celebrated the win with the boys when the whistle blew. Just shows the amount of character and loyalty to each other…. A major loss to our team today and the next few months is Ciara O’Keeffe who suffered an injury during the week. The boys were devastated to hear the news today when they arrived and would like to dedicate today’s win to Ciara… We wish you a speedy recovery and will look forward to her return.

Another frustrating day for our under 13s who had the upper hand for the first half. A really strong start that was full of hard challenges. Lee Freyne started off the game full of energy and pace until a bad challenge hampered the rest of his game. A soft penalty was then awarded to Ballyduff which they duly converted and Mooncoin heads dropped.

Jake Moore pulled off some really nice saves today but got caught to what seemed an error to everyone else but with the ball over the line Jake thinking he had to take a goal kick. Ballyduff were awarded a goal when they continued on after the refs whistle froze in the severely low temperatures. The back 5 of Alex Bailey, Liam Hogan, Adam Conway, Denis Kinsella and Ciara O’Keeffe Clicked very well and they worked for each other all day.. Mike O’Keeffe and Eoin O’Callaghan teamed up well today. Tom Conway showed some real presence and made life difficult for the defence.

Sam Hartwell gave 100% and Will Cuddihy added life the the attack when he came on and three good introductions of Matthew Morahan, Aaron Fewer and Harry Walsh added to the game… onwards and upwards for this bunch. It’s coming… well done everyone. 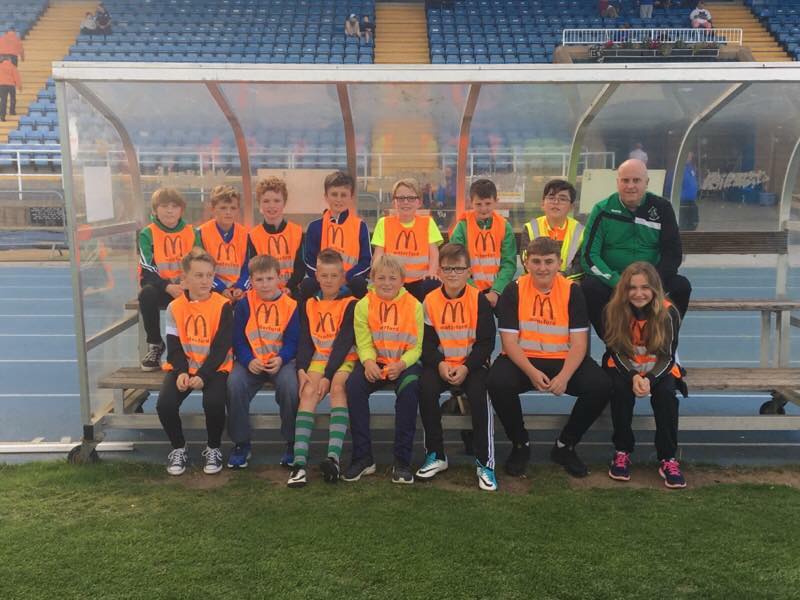 Our U-13s had a great night in the RSC doing ball boys for the FAI Cup game between Waterford FC and Shelbourne. Thanks to Mick Conway for bringing them in.